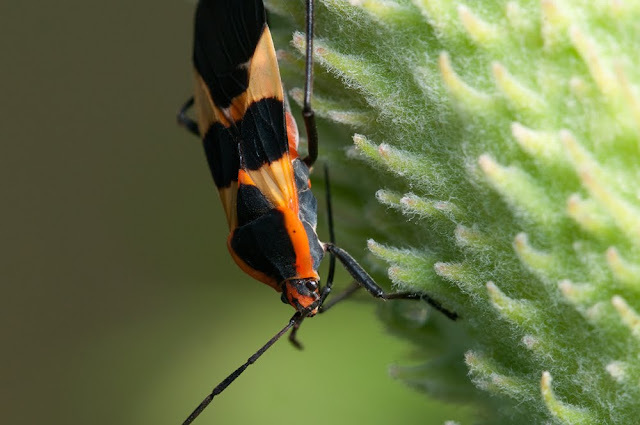 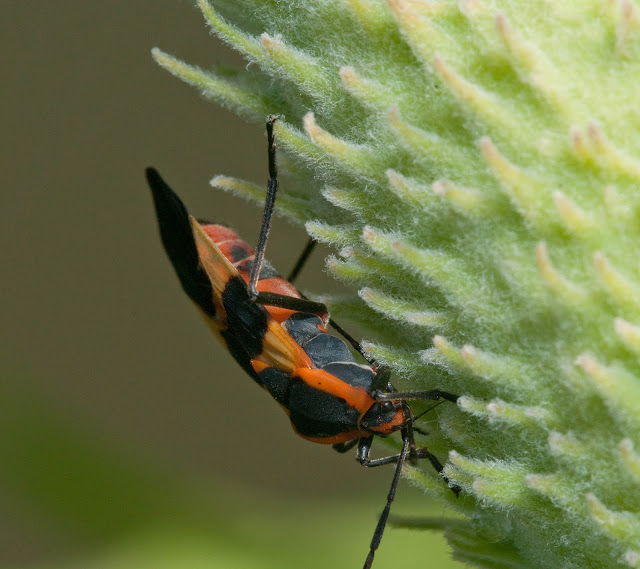 I find this picture fascinating! Here is a cluster of milkweed bug nymphs, which are very, very small. They are very brightly colored just like the adult even at this primary stage of their life. You may assume the larger one is the parent, but it is actually a nymph too! They go through 5 stages before they reach maturity. The stages are called "nymphal instars". Each time they molt, or progress to the next stage they become a little larger and more developed. The larger bug is simply in a later stage than the tiny ones-you can see it now has black "wing buds".  You may wonder why they are all piled up together.  Well, if you remember, their "warning coloration" fends off possible predators, so the more they cluster together, the brighter and more loudly they display this message!
Another interesting thing I witnessed: while two adults were mating, another male came inching closer and closer and finally rushed in and knocked the other male away from the female, had a very quick rumble with him and instantly assumed the position that the previous male had occupied. The first male scurried away. I found that interesting enough to mention! Maybe I spend too much time creeping through the milkweed? (I had pictures of this too, but I didn't realize my batteries quit working on my flash, and the photos were too dark).
Posted by Lisa Sells at 10:38 AM 40 comments: