The insect world definitely contains some totally wacky, creepy, kooky creatures!  In fact, viewing some species through my macro lens conjures up ideas of aliens, sci-fi and fantasy! Take for instance our first exhibit...when I first saw him he was literally a tiny, moving dot on a leaf. But, a peek through my camera viewfinder made me wonder what in the world (or out of this world) he was! Seriously, look at those eyes! That translucent shield and those spiked legs are just freaky! 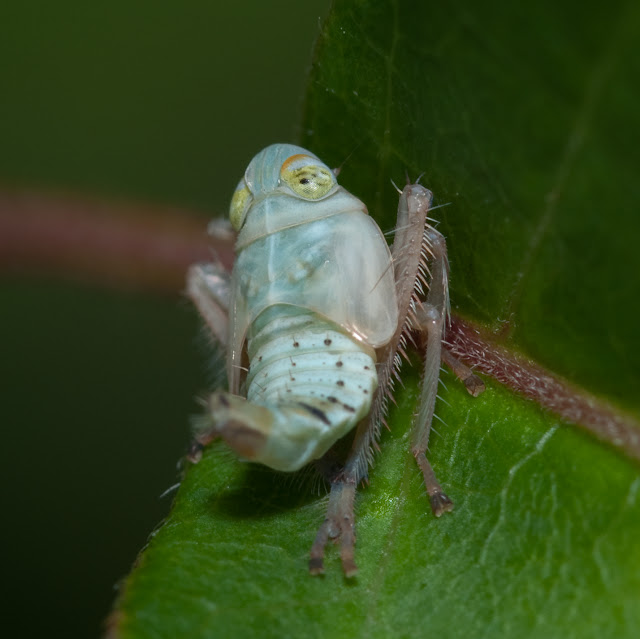 Actually this very common member of "Arthropoda" is known as a Leafhopper. For those wondering what an arthropod is, it is the largest animal group on earth.  This group of animals include the invertebrates (animals without backbones). Arthropods are identified as having an exoskeleton, segmented body and jointed appendages, and includes the insects, arachnids and crustaceans. By the way, arthropods are the most successful animals on the planet!

Ok, back to our leafhopper. They belong to the family Cicadellidae in the order Hemiptera. This particular one has not yet reached maturity so it is referred to as a "nymph". Leafhoppers eat plant sap so they have piercing-sucking mouthparts and rows of spine-like setae (hairs) on their hind legs. I have no idea which species this might be! He was actually very beautifully colored. His body was basically a mint green, with pinkish legs and yellow eyes trimmed in bright orange. The large eyes provide this insect with excellent sight and the REALLY long legs enable him to make a lickity-split hop out of sight if necessary! Now you see him...now you don't! 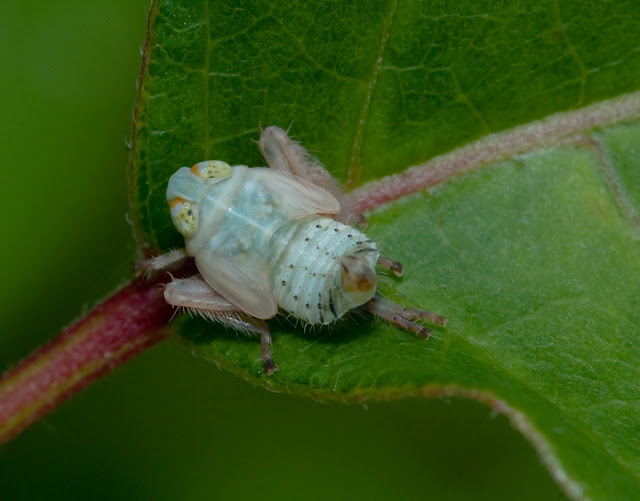 Leafhoppers are found in every habitat that supports vascular plants, on every continent and ecosystem in the world. These insects have changed very little since the time of the dinosaurs. In fact there are some regions that contain leafhopper fossils from 35-55 million years ago that are indistinguishable from species found today in those same regions. Like many other insects, they communicate with each other by producing songs through special sound-producing organs on their abdomens called "tymbals". Of course, these songs are inaudible to the human ear. I read when an adult sits on a leaf and calls to a mate, the song makes the plant vibrate! Interesting, huh?

The picture below is of an adult leafhopper (probably not the same species as the nymph pictured above). This is the Red-banded Leafhopper (Graphocephala coccinea), also known as the Candy-striped Leafhopper or the Scarlet and Green Leafhopper. Many leafhopper species are brilliantly colored and patterned, although others are green/brown. This one is secreting "honeydew" (see the droplet at the end of the abdomen). Honeydew is a sweet substance that is produced after digesting the plant sap, and it is eaten by ants, wasps and other insects that are attracted to sweets. 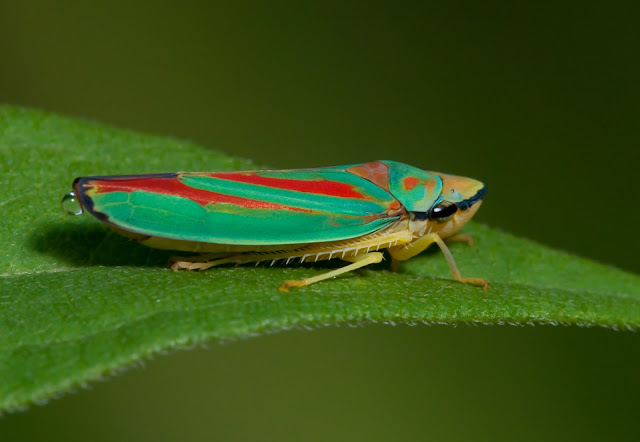 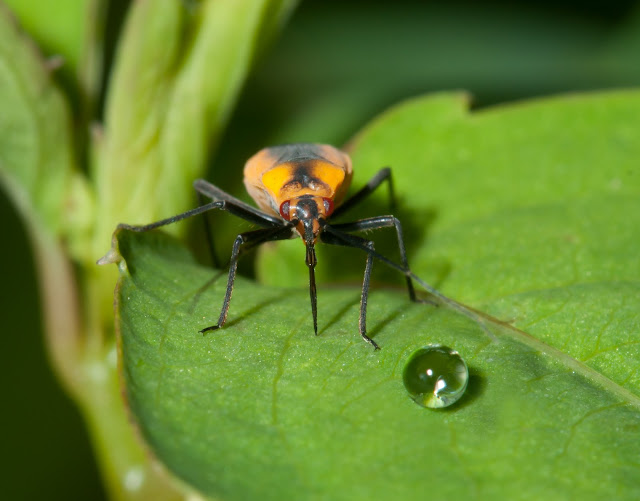 The proboscis on this Phlox Plant Bug looks like your grandmother's darning needle! As you can see, this insect has piercing-sucking mouth parts that are used to inject tissue-dissolving saliva into a plant, then suck up the fluids. This bug has developed such a liking to the phlox plant, it was named after it! The phlox plant bug feeds on and breeds on wild phlox, but is considered a pest of cultivated phlox.

The early morning dew drop really puts the size of this insect into perspective! He may be small, but his   coloration speaks LOUD AND CLEAR! His bright orange and black aposematic colors act as an "advertisement" to predators that he may be toxic or distasteful (part of his survival plan)! Aposematism is an adaptation in nature that allows an organism to escape harm by mimicking other organisms that are harmful to predators if eaten. Colors, sounds, odors or other characteristics are displayed that can "fool" predators to believe they will be toxic if eaten. In this case, the coloration is a well-known "red flag" to predators that this meal could be bad!

The picture below clearly demonstrates how this insect is easily able to puncture and gorge himself on plant juice! 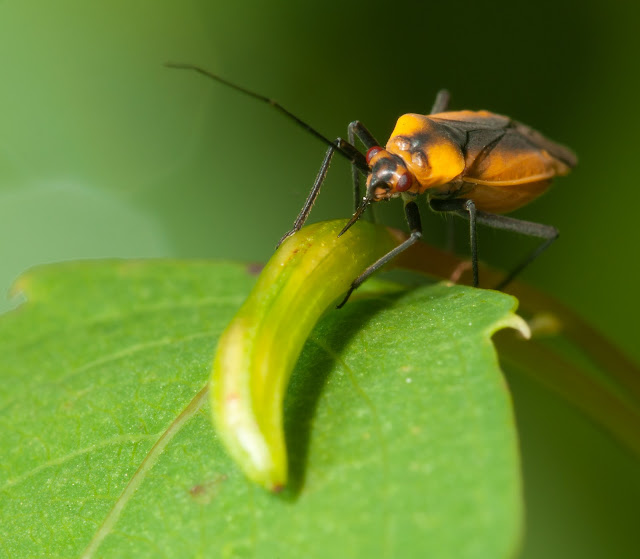 This next creature is the Virginia Ctenuchid Moth (Ctenuchid Virginica). I saw him feeding in a large, quiet meadow in West Virginia and was attracted to his brilliance and long dark wings.  I thought they appeared similar to a long dark cloak. In fact, if Gotham City existed in the insect world, this would definitely be the Caped Crusader aka Batman! I definitely see a resemblance! This beautiful moth has a striking appearance with his metallic blue-green thorax that is accented by his bright yellow-orange head. I believe this is a female because the male has magnificent feathery antennas. This one's antennas are not nearly as feathery as those of the handsome male. The adults fly primarily in the daytime and feed on nectar. 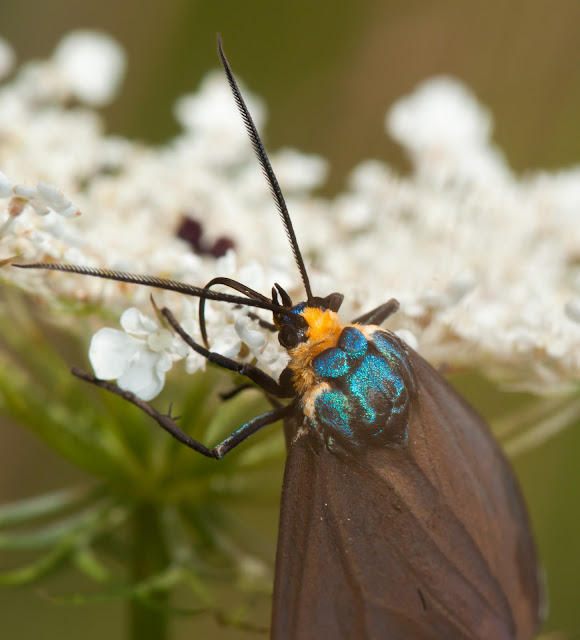 Yikes! Now this one does look very alien-like! This bizarre bug is a Crane Fly (genus Nephrotoma). I wont' even try to guess the species since there are so many that are similar. This gangling fellow may resemble a giant mosquito, but he actually belongs to a group of harmless flies.  They do not bite and in fact, most adults do not even eat. They have a very short life span of about 10-15 days. The most important function of the adult is mating and egg-laying and they require water more than they require food. 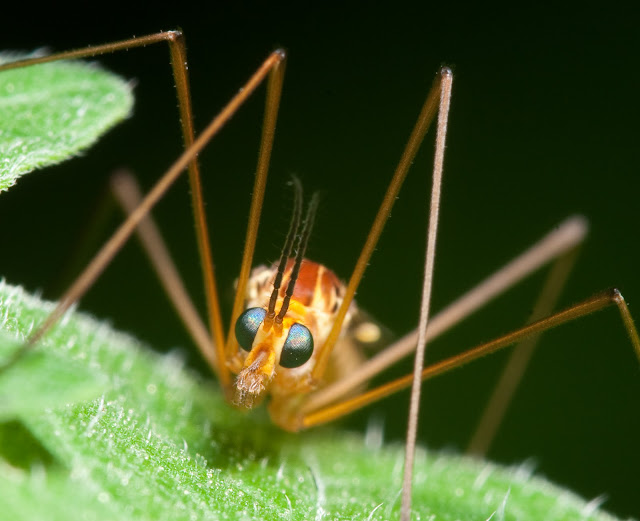 Crane flies serve an important role in the ecosystem, as the larva and adults serve as a food source for many animals such as birds, frogs, lizards, spiders, dragonflies and many other insects. The crane fly larvae are detritus feeders (they eat organic material), which helps to enrich and renew the soil.

They are rather strange looking, but I still think they are beautiful in their own way!

Here is another type of fly known as the Marsh Fly (family Sciomyzidae). This odd-looking insect is actually also known as "snail killer" because they will lay eggs on snails, slugs and other mollusks, and the larvae will then parasitize the organism. 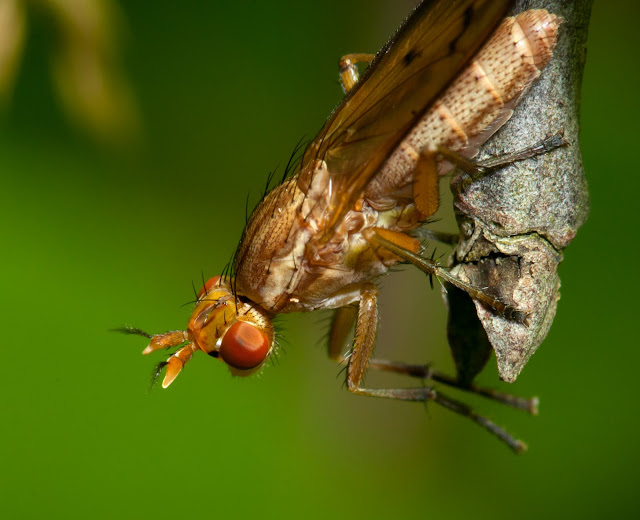 The marsh fly is slender, has prominent eyes, forward pointing antennas and bristles on the upper hind legs. They have various brown markings on their wings that differ with each species. They feed on dew, nectar and tree sap. They are found around ponds, rivers, and marshy areas throughout North America where there are abundant snails and mollusks that serve as the food source for their larvae.


Lord of June! This is one of the names given to the  Common Green Darner (Anax junius).
This very large dragonfly resembles a fighter pilot as he patrols swiftly back and forth over his hunting grounds on ponds, lakes and other bodies of water. They are one of the fastest and largest dragonflies in North America. 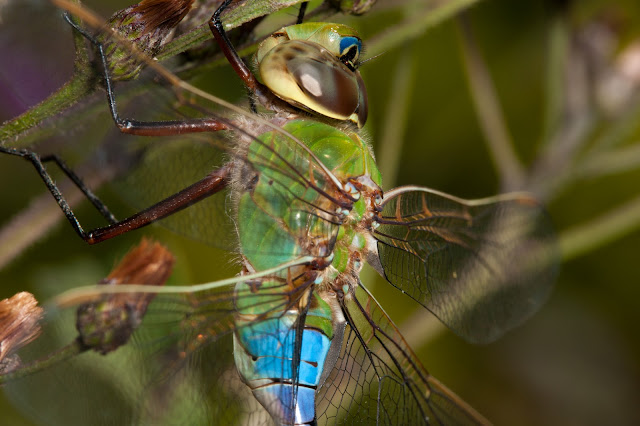 They have also been referred to as "mosquito hawks" because they feed on many insects harmful to humans, especially mosquitoes. This agile, carnivorous predator has tremendous flying speeds and astounding eyesight that enable them to grab their prey right out of the air. They have powerful jaws and a huge appetite, which is a terror to winged insects that cross their path, but very beneficial to us! Their green and blue markings are very brilliant, and the wings shimmer in the sunlight. I love to watch them hunt and hear the sound of their wings as they do fly-by's! I was very lucky to find this one warming up in the sun...you won't see them land very often!
Posted by Lisa Sells at 12:38 AM 43 comments: