This title may bring to mind a violent character in a mafia movie, but the term "Liquidator" also  accurately describes the feeding behavior of this lovely but deadly orange invertebrate. Meet the Assassin Bug! This particular one is a nymph, meaning he has not yet reached maturity. They go through different growth stages before becoming an adult. His physical appearance will change somewhat and he will also grow wings by the time he reaches his final stage of maturity. 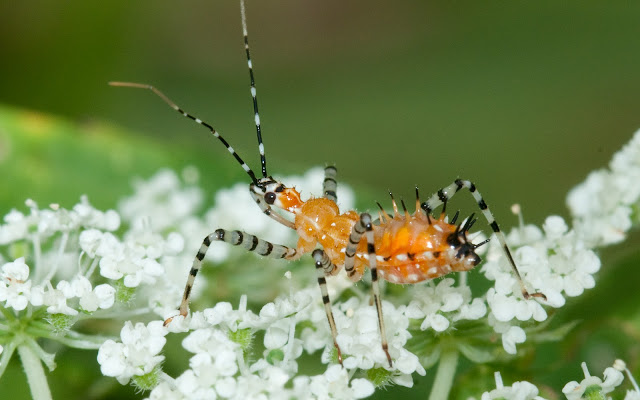 So what is so intimidating about the behavior of this orange, spiny creature? Well, the following is proper dining etiquette according to this species:

The Assassin Bug will either lie in wait to ambush his prey or will stalk it, and then aggressively grab it with its powerful forelegs and plunge its "beak" (proper word is rostrum) into the unfortunate prey's body, pumping a powerful dose of lethal toxin into the tissues, which paralyzes the victim, then liquefies his insides. The Assassin Bug then guzzles up the gooey goodness through the same straw-like tube that he used to impale the victim with. Depending on the size of dinner, the Assassin Bug may feed for up to an hour to get every last bit of ooze. (Ahh, good to the last drop...wait, isn't that a Maxwell House slogan?) If that thought isn't bad enough, keep in mind that this insect is not afraid to attack something much bigger than itself! The potent poison is capable of liquefying a small insect in as little as 3 seconds and can even "do the job" on a very large caterpillar in as little as 7 or 8 seconds!

As I stated above, this nymph will change somewhat in appearance, but most Assassin Bugs share some general characteristics...an elongated head, narrow neck, long legs, and the prominent tube for feeding (rostrum). The rostrum can be a surprising weapon, containing tiny needles (stylets) that are used to puncture the food source, but while not in use it is held curved up toward the underside of of the body. The end of the rostrum is often held into a groove called the prosternum.  Notice how in some pictures the rostrum is tucked under, and other times, during hunting, it is swung forward. Interestingly, the insect can rasp the rostrum against ridges in the prosternum to produce sound--a tactic often used as an attempt to deter predators. If this warning doesn't work, the agitator receives a quick, painful stab.


There are thousands of species of Assassin Bugs that live in fields and forests world-wide. Mexico, Central America, and South America even have a species that likes to co-habitate with humans, and they have been known to transmit a potentially fatal disease called "Chagas Disease". We don't need to worry about that here in our part of the United States though. There is, however, a species commonly called the "kissing bug," because it lurks around at night in homes and will bite humans on the lips! This one is not prevalent in our immediate area either, but lives in the more Southwestern part of the United States. Some assassin bugs kill specific insects

That being said, you should still respect the species we have in our area because although they are normally a slow-moving, mind-their-own-business type of bug, they will inflict a very painful defensive bite if handled carelessly. Their "bite" is actually the same process they use to kill their prey...they will stab your skin and inject the same toxin into your tissues that is used to paralyze and kill insects, and this could cause necrosis cells at the injured site, causing burning and pain initially, and then an itchy lump later. There may even be a few individuals that are sensitive to the bite and they may experience a swollen tongue, larynx or difficulty breathing (as in bee sting allergies).

I felt very fortunate to be able to observe this Assassin Bug nymph as he was walking and hunting along the tops of some Queen Anne's Lace blooms in a field at Clear Creek Metro Park. This was the first of this species I've seen, and I thought he was strikingly beautiful. I loved the way he kept his eyes on me the entire time that I kept my eyes (and camera) on him. He literally watched every move I made. He had a very slow, deliberate pace as he moved from petal to petal of the flowers, carefully moving one leg at a time. I'm not sure, but I would imagine this "stealth walk" decreases the chance of him being noticed by his potential prey. The following are a series of pictures I took just because I loved observing him...His steady eye never leaving mine! By the way, these insects are actually very beneficial in controlling harmful insect populations. They do much more good than harm regarding their impact on humans. 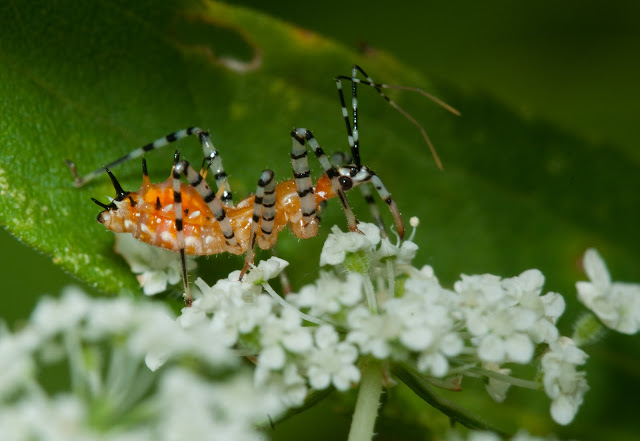 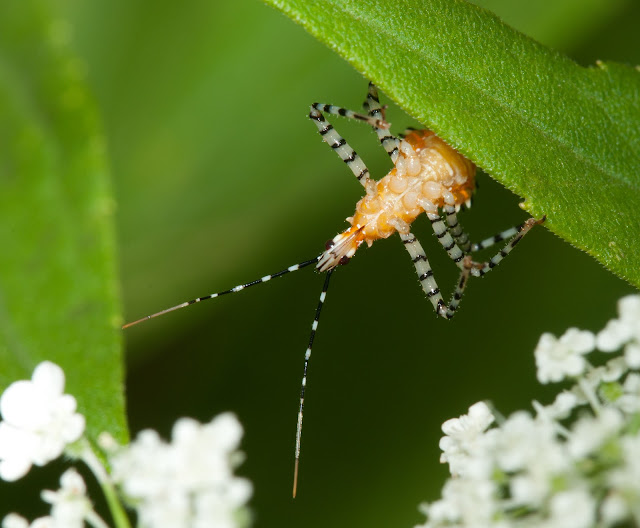 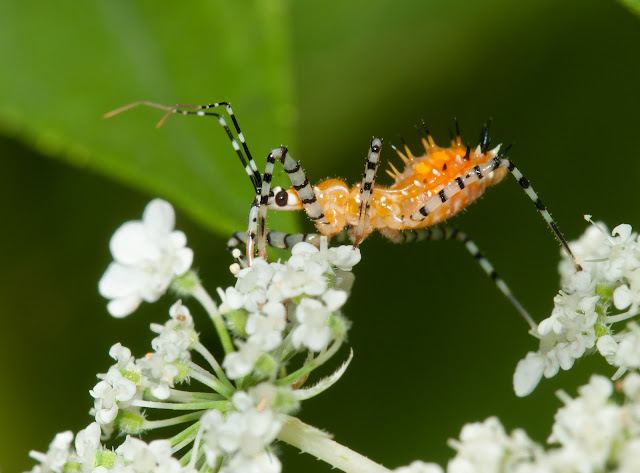 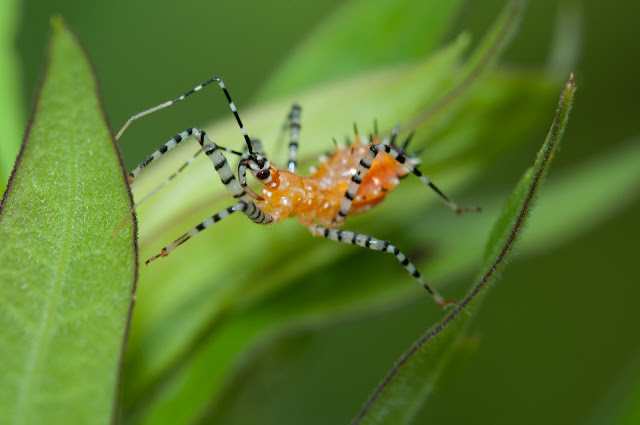 The genus Pselliopus is distinguished by the black banded, bright orange bodies.  believe the species in this blog is the Pselliopus cinctus, which is very similar to Pselliopus barberi. (It is hard make a positive ID of a nymph, but these two species are the common ones found in the Eastern United States). The bands are black and white on the cinctus and orange and black on the barberi. Dennis Profant, Entomology and Natural Resources instructor at Hocking College helped me to identify this one because of the confusion between the similar species (there is yet another species that also has the same coloration, but is only found in the western states). Insect identification sure gets confusing...I'm sure glad I have Kaufman's Field Guide to Insects and an Entomology instructor as a friend!
Posted by Lisa Sells at 9:53 PM