Every time I stop by Clear Creek Metro Park I find new and fascinating creatures. I guess it is a good thing I am rather short, because I find the most interesting life forms among the low-growing foliage or at ground level! As I walk along the beautiful trails, I keep my head down and finger on the shutter of my camera because I am ALWAYS surprised at what I see and there is a photographic opportunity just about anywhere. There are so many beautiful species of plants, insects, animals and birds throughout this area. As I meander along my favorite trails, I always leave with photographic captures of little wild things that instill in me a sense of wonder. My insatiable appetite to learn more about nature continues to grow as I make new discoveries along the footpaths of this beautiful and peaceful area. The following are just a few of the many wildlife encounters I've had the privilege to photograph at Clear Creek Metro Park.

I was so excited to have this five-lined skink come out of hiding and inch his way right up to my feet, looking me right in the eye as if he was as curious of me as I was of him! This was the first time I've seen one of these lizards, and you can bet I was impressed  by his bright orange head! 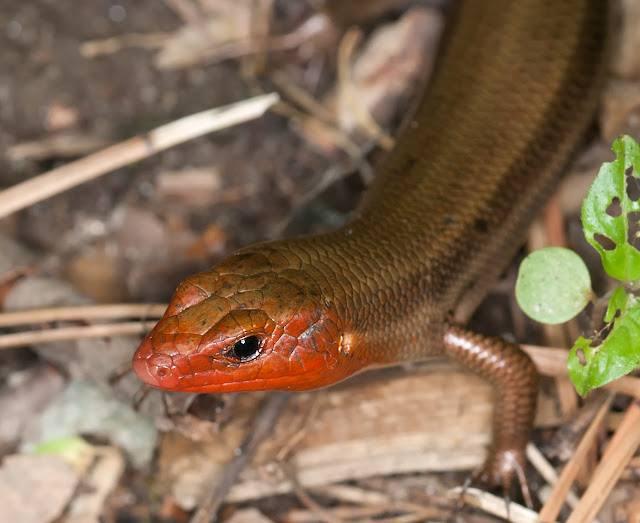 I was pleasantly surprised how at ease he seemed to be as I observed him and took pictures.  He even scurried up a tree stump beside me and relaxed for a bit, never taking his eyes off me.

After a few minutes, I guess he decided to retire for the evening, and he ran down the stump and crossed the little footpath I was standing in, and quickly disappeared into a crack in the side of an old abandoned cabin. A few seconds later, he popped his head up one last time, looked at me, then disappeared again! It was my birthday that day, and I couldn't have received a better gift than sharing those few minutes with that beautiful creature! 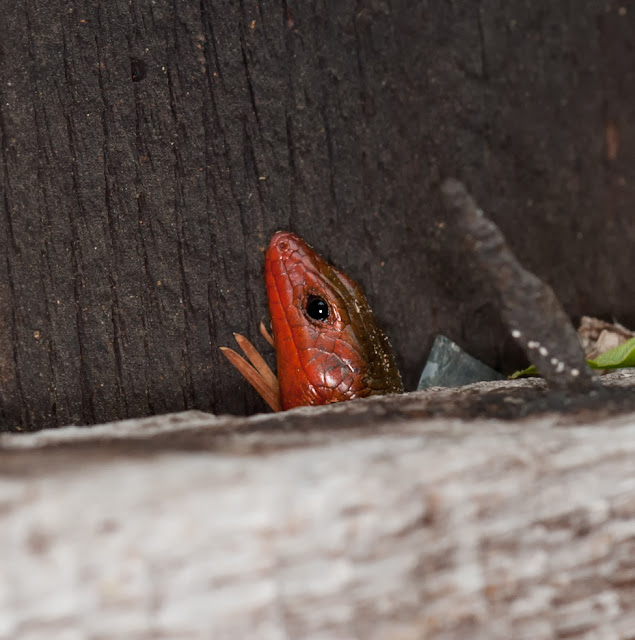 Now here is a tiny insect that I just love...the Tortoise Beetle. This particular one is the Clavate Tortoise Beetle (Plagiometriona clavata (Fabricius). I did an earlier post (There's Gold in Them Thar Weeds) that featured another tortoise beetle called the Mottled Tortoise Beetle that has a gold metallic sheen. They stay really, really low and they are very skittish, so it is a challenge getting a picture. They really do look like tiny turtles with little see-through shells, and they pull in their antennas and legs just like a turtle when they feel threatened. 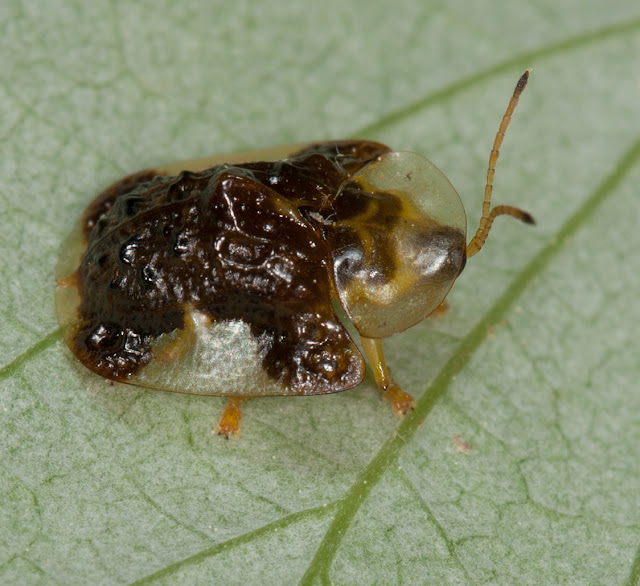 This particular species has more of dull appearance, and he actually looked like a tiny rotten spot on the vegetation, making him very inconspicuous.  Some species of tortoise beetles are very brightly colored or have a very bright metallic coloration. They will, however, quickly fade if they are threatened, which is a defense tactic. They will also lose their bright coloration if collected. I sure hope to be able to find and photograph some of the other species throughout the rest of the summer. The following photo is that of the Baltimore Checkerspot caterpillar. They are very beautifully colored and very spiny. There were a couple of entomologists that told me the Checkerspot liked this particular small meadow at Clear Creek because it contains the plants they like to feed on. The entomologists were pretty interested in keeping track of them because they are fairly uncommon in our area. 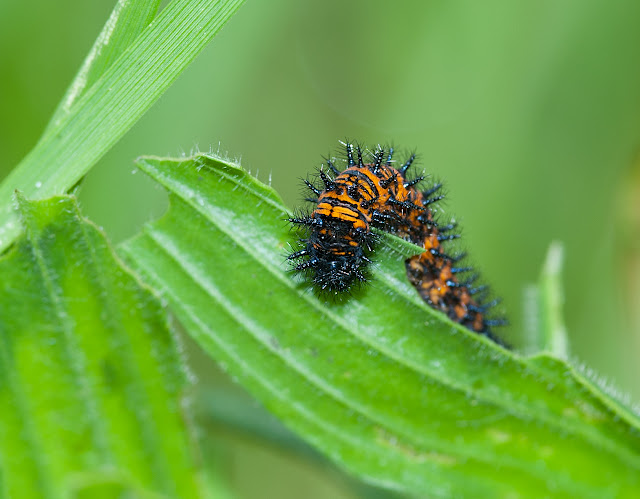 About three weeks later, the transformation had taken place, and this small meadow became home to the very pretty Baltimore Checkerspot Butterfly! They are poisonous to birds, so the butterflies are not particularly worried about being eaten. Because of this, they can be easily approached without feeling threatened, and will even crawl onto your finger or land on your shirt! I just love them! 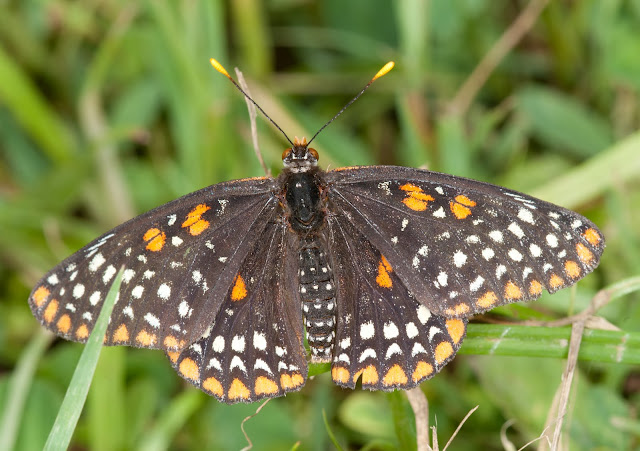 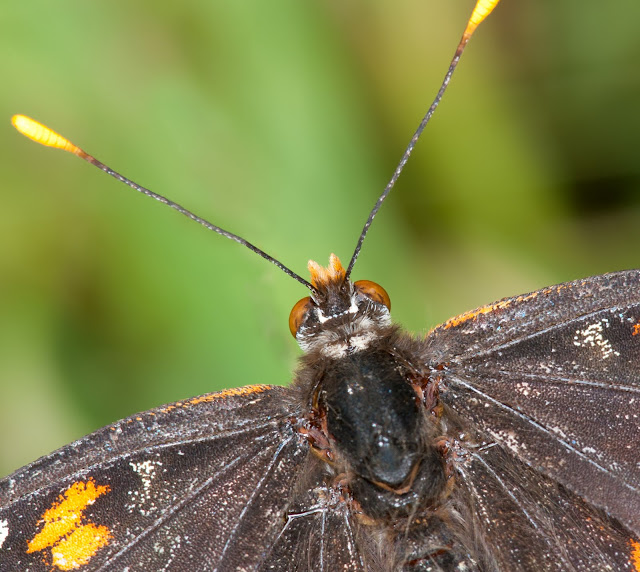 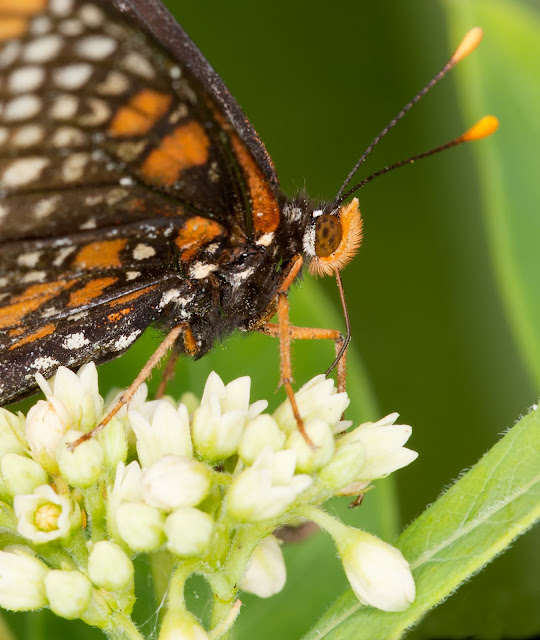 This tiny butterfly is the Azure. There is a Summer Azure and a Spring Azure that are almost indistinguishable, so I am not certain which one this is.  They are very common in Ohio. They will frequent muddy areas--in fact this one kept landing in a muddy area right alongside the road where I was parked. 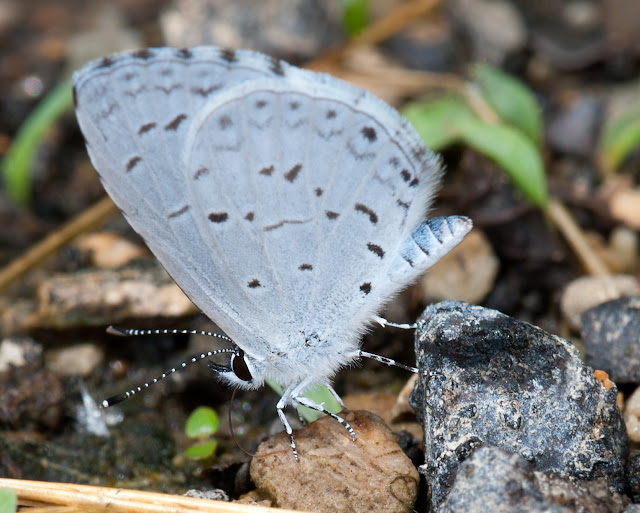 This is also a tiny butterfly that is very common in Ohio. It is the Banded Hair Streak (Satyrium calanus). I love watching this delicate little beauty. 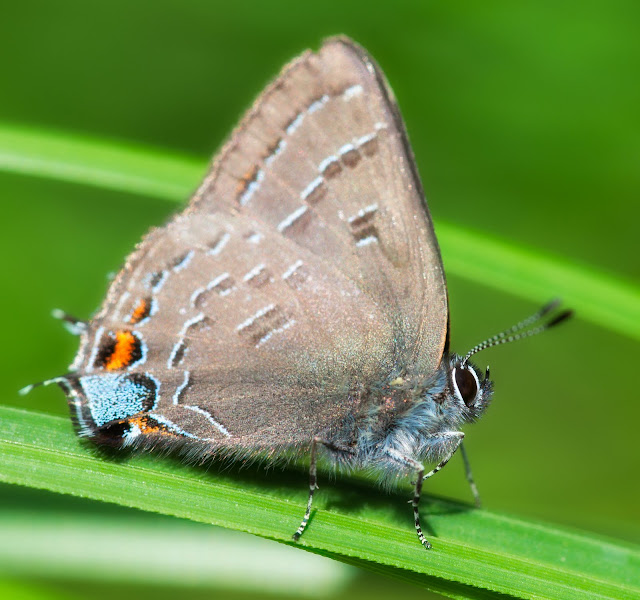 Here was an exciting find...a Tiger Swallowtail Caterpillar! He was in the same location as the 5-lined skink. Those eye spots are just amazing! 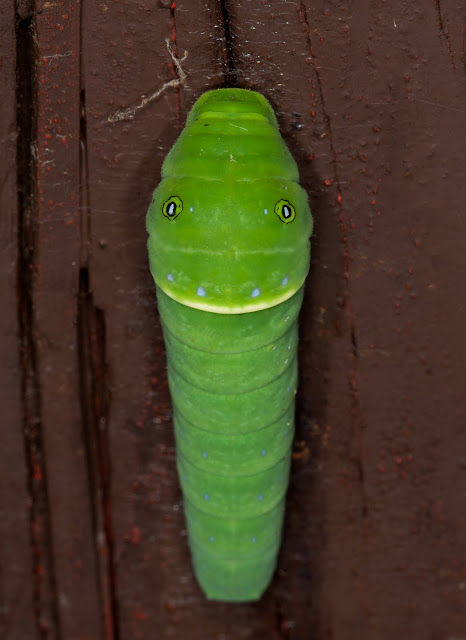 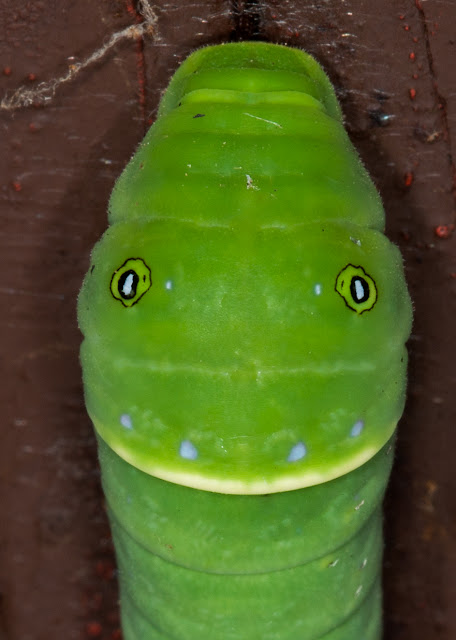 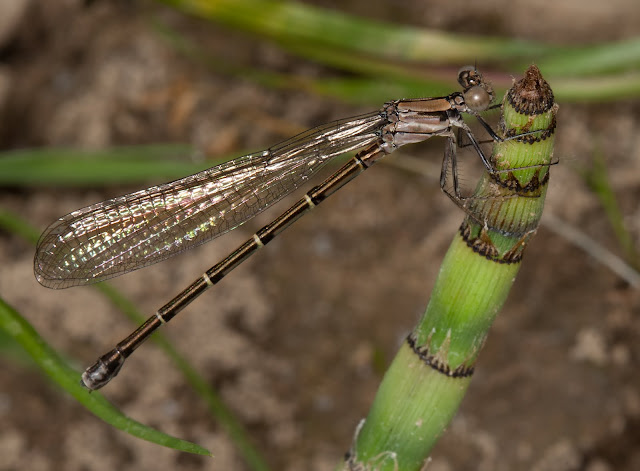 Clear Creek is always full of surprises, and most of them may be found below knee level, but this next experience was the highlight of my evening and about 15 feet higher up.  Here is a picture of a barred owl that was taken at the very same spot where I saw the skink and the tiger swallowtail caterpillar. I heard his familiar "who cooks for you" call and I answered back with my best barred owl impression, and he landed on a branch to check me out! Within a few minutes there were 3 barred owls in the branches right above my head, and we all took turns calling to each other! It was a true caterwauling fest! Yes, Clear Creek is an enchanted place! 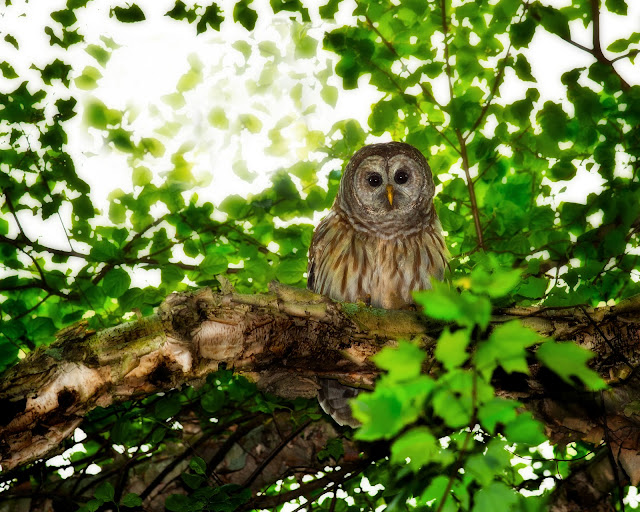